How do you rate our service? 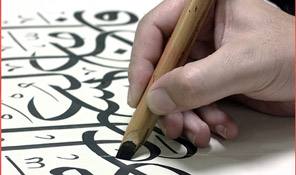 Developing the art
Arabic calligraphy is a handwritten script and therefore different from the fonts created for Arabic typesetting. Arabic calligraphy is at the heart of the Arab art world, which has a rich tradition of communicating ideas and thoughts through handcrafted lettering. We offer an in-depth understanding of the vital role Arabic calligraphy and language play in the diverse cultures we serve. Many logos have been crafted by our Arabic calligraphers – we are happy to provide this unique service in the UK. Elegance is key. Any typography should always be crafted alongside any imagery so they work together in harmony, and as a whole. We are 100% committed to making sure the content and the calligraphy are balanced in meaning and in mood.

Arabic script has its roots in the first alphabet created by the Phoenicians around 1000 BC. All Arabic calligraphic styles fall into two main categories: the Muqawwar wa Mudawwar (the curved and rounded) and the Mabsut wa Mustaqim (the elongated and the straight). There are many variations that exist in different parts of the Arab world. Two scripts that have similar origins may well appear very different because of cultural, political, economic and religious factors. We bring to every job an understanding of this history, and translate that knowledge into a visual that is unique to each project, optimising the aesthetics of Arabic calligraphy with the technical aspects of Arabic typography. We are always looking for ways to achieve the best result. Our work is distinctive because we care about it.

Arabic calligraphy, the art of artistic handwriting, is one of the highest art forms of the Arabic world. Arabic calligraphy provides the link between the languages of Muslim speaking nations and the religion of Islam. It is often associated with the geometric art used to adorn the walls of Mosques, and prestigious monuments and as well as on the page. However, before the advent of paper, papyrus and parchment were used for writing. The advent of paper revolutionized calligraphy. It enabled it to become accessable to the masses. While monasteries in Europe treasured a few dozen volumes of books, libraries in the Muslem World regularly contained hundreds and even thousands of volumes.

There are six major scripts used in traditional calligraphy, Farsi, Naskh, Kufi, Deewani, Req'aa and Thulth, each with different features. Early examples from the 5th and 6th century A.D. show evidence that it was originally developed as a script to preserve the Qu’ran. However the Arabic alphabet developed rapidly after the rise of Islam in the 7th century to become a beautiful form of art. The main two families of calligraphic styles were the dry styles, called generally the Kufic, and the soft cursive styles, which include Naskhi, Thuluth, Nastaliq and many others.

Still today professional Calligraphers are highly skilled individuals and held in great esteem. Arabic Calligraphy is spectacular in its composition, often abstract but figurative imagery is frequently used in the teachings. This method of painting is where letters are grouped together to transform the script into other objects. These shapes transform into beautiful imagery, for example the letter ”ha” can be made to look like two eyes or sometimes the artist may shape the script into an organic form such as an animal or symbolic creature.

Arabic Calligraphy is now extremely popular and is widely known as one of the most beautiful ancient art forms, and a major feature of Arabic culture.